The music being blasted from the truck’s speakers was stunning – as in, if you stood too close you would get stunned. But with 40-50 people between me and the truck, and another 150 or so behind the truck, I figured I was in a pretty darn good spot in the parade. What parade? Why, Advans’ 10th  Anniversary walk/dance through the streets of Accra parade!

My colleagues at Advans informed me everyone would be there on Saturday at 6am for a 7am start.  I set my alarm for 6:15, knowing if I got there by 7 I would still be an hour early.  Sure enough, I got there a couple of minutes before 7am and I was probably the 10th one there.

The rest of the Advans employees from around the Greater Accra Region – about 180 I would guess – trickled in by 7:30, and we were off by 7:45am. 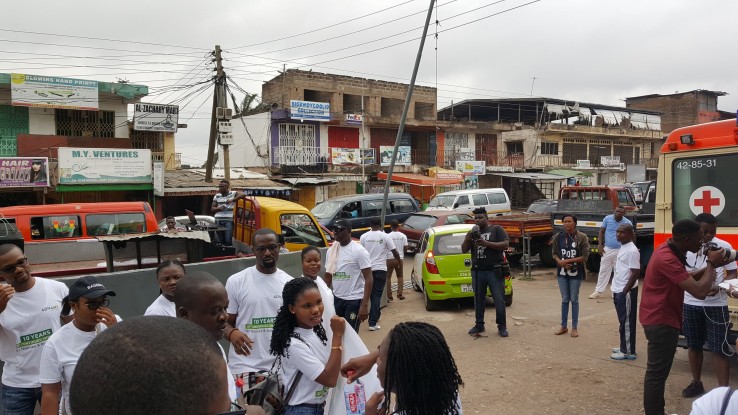 Banners, music, dancing, handing out flyers, a police escort to manage the traffic (we were under police orders to say on street and off the sidewalk – go figure), a truck with massive speakers, a DJ and support vehicles – made up the 2 hour walk around Accra under fairly cloudy skies – thank god! 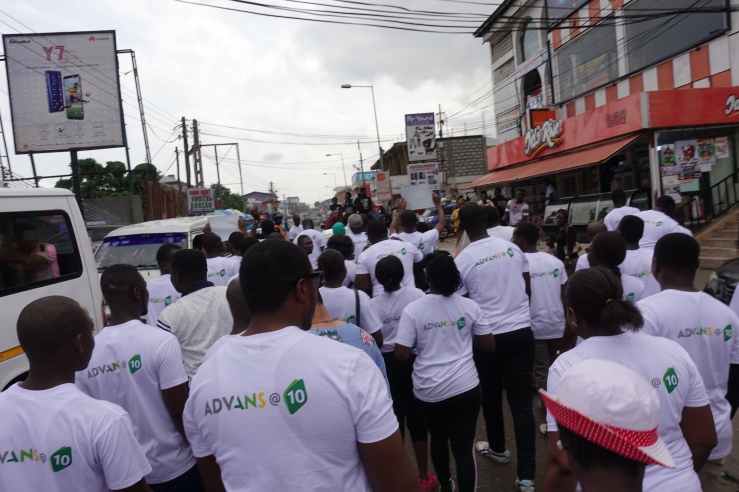 Our band of merry-makers drew quite a crowd of onlookers, who were eage to take the flyers.  We finished up back at HQ for more water and of course, aerobics! Yup, because 2 miles walking wasn’t enough, now that the sun was out and merciless, it was time for some real sweating-to-the-beat! I took some pictures, but was quickly called in to join the ‘fun’.  I lasted about 15 minutes, and then made a beeline for the water and shade. I definitely made a better cheerleader than participant!!

Once the jumping, swaying, flailing and good times came to an end, next on the agenda was kenkay and fried fish. I grabbed my driver, who had been ecstatic to be invited to join in the walk (I think it was all about the t-shirt), and declared it was time to leave.

I may be embracing my new adventure, but really, too many adventures in one day…hmmm, will have to come up with an ending for that!  Any ideas anyone??